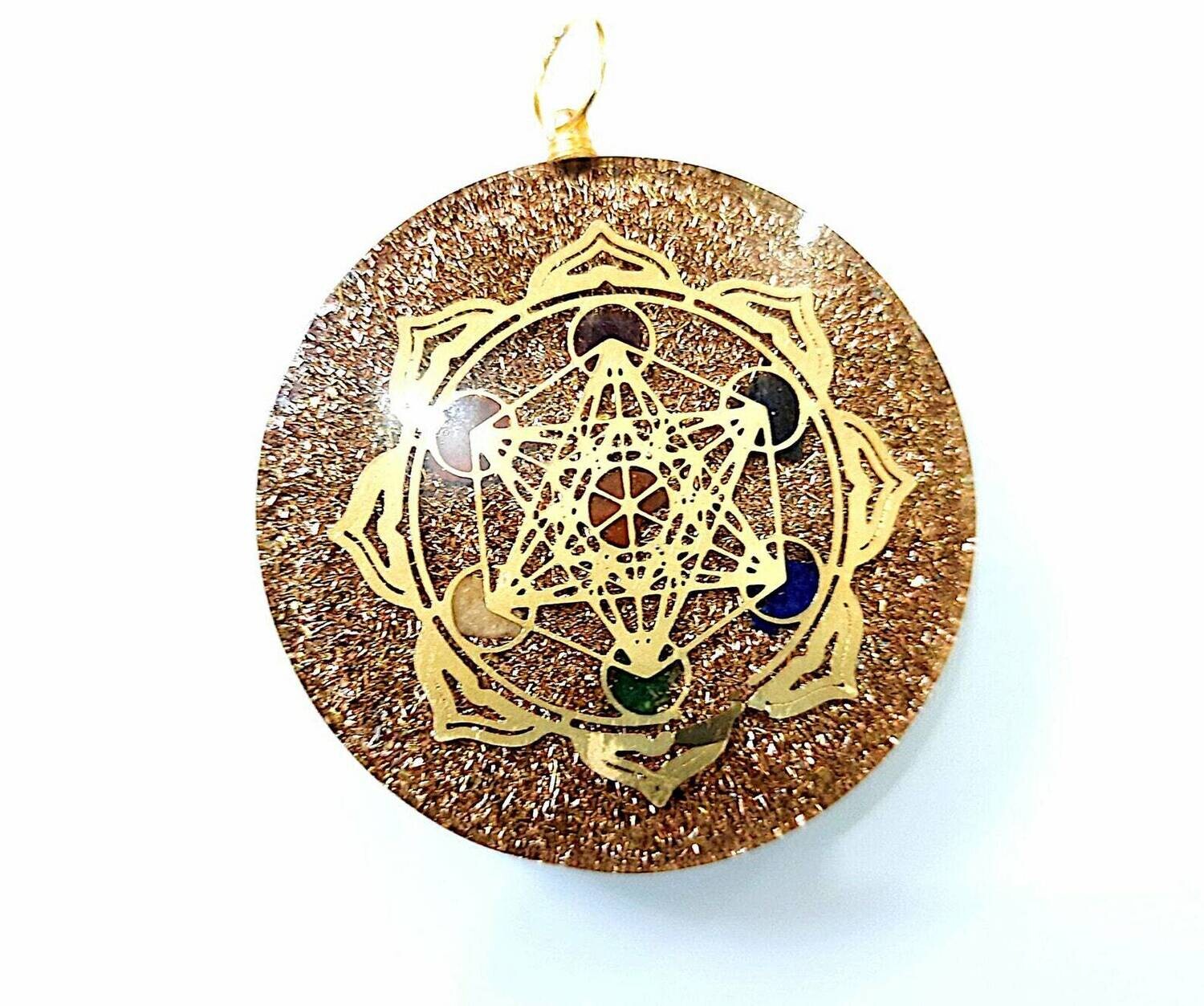 As well as the ordinary chakra crystals the we have also included AUTHENTIC Moldavite and Libyan Desert Glass Dust
in this beautiful offering.

It has Metatron symbol and natural 7 chakra stones beneath it

What is orgone? ORGONE is also known as prana, life force, ki, chi, mana, universal energy...etc
Orgonite is a mixture of catalyzed resin with metal shavings, poured into small moulds. It is said to attract etheric energy similarly to Dr. Wilhelm Reich accumulators.
Some people also add small quartz crystals to the mixture for their ability to make the energy more coherent or to enhance the working of the orgonite.
Thus orgonite basically is a substance which functions as a self-driven, continuously-operating, highly efficient energy transmutation device, drawing in negative life energy and transmuting it into positive energy.
The resin in orgonite shrinks during the curing process, permanently squeezing the crystals inside which creates a well-known piezoelectric effect inside the crystal, meaning its end-points become polarized electrically, this apparently causes it to function more effectively as a positive energy generator.
Some people use orgonite to combat pollution and cell-tower radiation. Others use it to clear energies in their houses, to enhance the growth of plants in their garden.
It seems to work also really well in various kinds of healing work. Energy sensitive people have given me various comments on how orgone affected them. They have shown that it really does work. You can also interact with it and use it for specific purposes.
When you look around on the internet you will find people using orgonite for all kinds of purposes.
**Benefits Of Orgonite**
• Turns negative energy into positive energy.•
Purifies the atmosphere, detoxifies water.• Helps plants to grow better, repels pests, and requires less water.• Mitigates harmful EMF radiation.• Disarms and repels predatory forms of life.• Inspires a pleasant demeanor and balanced happier moods.• Frequently remedies insomnia and chronic nightmares.• Helps awake you innate psychic sense.• Keep demonica entities out of your home and environment.• Improve the moral nature of the people around you.• Stop headaches and migraines and will improve overall health. Orgonite also neutralizes the harmful affects of EMF radiation all around us from electrical devices. These positive ions in the air are bad for our health. The job of orgonite is to neutralize these positive ions and turn them into negative ions. These negative ions are prolific in nature and have a harmonizing influence on our nervous system, moods, stress and overall health.
Precious and Semi-precious gemstones have been used since recorded history and probably before, for spiritual, emotional, and physical healing. Healers all over the world are using them.
The gemstones emit steady pulses of varying frequencies which when used in meditation or healing are placed over the chakra or meridian systems and help bring the body back into balance by stimulating the endocrine system and keeping the meridian pathways clear

Save this product for later
Display prices in: GBP